‘March’ing our way ahead – Snippets from my fairy-tale wedding 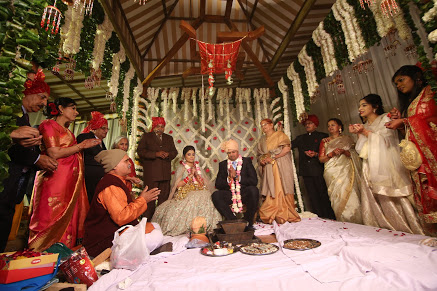 March is usually the time when things ease out, financial year ends, winter makes way for spring and all things transition to make way for a full bloom. But this year has been different and disruptive. While work from home looks like the new normal, no one can predict how and when the COVID-19 situation would end.
As for me, just glad that we were able to make it in time for our wedding. Without making this one of those soppy articles on what lies ahead, what could be/should have been etc., I’m going to focus on the rather sunny side and the bonhomie that ensued as part of our wedding celebrations and beyond. Yes, I’m in quarantine and no, I’m not complaining.
To an outsider, this may seem like a chain of segregated events/functions or one big party, but for me, it has been a journey. Months of planning consummated with a series of ceremonies, each one with its own special meaning.
Mehendi
The festivities kick-started with the mehendi ceremony, which saw all my close relations get together at our place. Post a hearty meal and rehearsing our dance moves, I got ready in the poshak, given to me by my mom-in-law. A heirloom piece, it was handed over to her by the maharani of Sanand, Gujarat. The dholki came out, and so did all the Punjabi folk songs sung by my very talented family members. Within no time, we were all humming to the likes of ‘Chitta kukad banere te’, ‘shava charkha chandan da’, ‘kala doria’ et al. Meanwhile, the mehendi-walas did a fine job and surprisingly wound up quicker than expected. The evening mood was set with initial greetings and raising a toast as families met each other over dinner at KOI (Khetarapal Officers’ Institute).

Color me ‘yellow’
The Haldi ceremony was a delightful mix of friends, fun and frolic! The yellow haldi on the smiling faces shone bright in the gleaming sunlight. I remember vividly, the first smear of haldi by my parents was enough to get me teary-eyed. A swirl of emotions brewed and that was the moment that embarked upon me a sense of realization. This was no fun & games, nor any melodramatic episode of ‘Made in Heaven’ – this was real and I was getting married. Close relations and friends came in next, and by the end of it, everyone was soaking in the mellow yellows.

Dance till you drop
You dance to celebrate, you dance to remember, you dance when you’re happy and once in a lifetime, you dance a hell out when its your sangeet. With fervour and tempos reaching sky high, the evening saw its share of folk singing like voices of a nightingale, some epic dance moves, intense dance offs, lots of shots, a lot of paparazzi (at times unwanted) calling out for ‘bytes’, and a whole lot of josh. It was a night to remember, it was a night to forget, it was the night of our lives!

Choora
With little sleep, inflated tempers, and a rush of frenzy, I got up the next morning, dressed in my chosen outfit, and headed for the open terrace, where my place of seating for the choora ceremony was fancily decorated in all its glory. The beautiful, bright umbrellas adorned the walls, and right on the sides of the baithak, flowed the long strings of orange genda (marigold) nestled on the bouquet of choicest flowers. I closed my eyes, as I was told to do (as per tradition, the bride does not see the choora, to evade her own evil eye which might bring misfortune) , and the choora set was placed in milk, as the panditji commenced the auspicious ceremony, chanting mantras.

The set of red and white bangles were slowly moved down my wrists by my mamus & mami, and within seconds wrapped in velvet cover before I could open my eyes again. The kaleeres came in next, and the beautifully designed pair was tied by my parents first, then by my grandparents and close relations. The golden bunch of kaleeres making a peculiar sound, resounded the freshness of a new chapter in my life, a milestone.

Then came the most celebrated and anticipated element of the ceremony; all my unmarried cousins & friends (women only) sat in a queue waiting for the kaleere to drop on them. And so they did, on not just one. The gleeful charm and the air of ecstasy, at its peak, filled the environs, as everyone gradually grabbed some food while I headed out post a quick lunch to the make-up artist to get ready.
The wedding
The wedding outfit was placed on the hanger, make-up donned, hair intricately tied in a bun, and three hours later, I was ready to make the move, along with my mom. It was raining profusely, as I glided into the backseat of the car, now on our way to the venue – a vivid memory. Getting down the car in the heavy rain, not usually a feat, seemed like one with a lehenga that could double up as gym weights. Then came the friends in the dressing room, & pop came out the cameras for a quick round of photos, before the ‘baaratis’ arrived. It was time for my ‘entry’ as my brother swooned to ‘Balle Balle ni soneya de rang dekh lo’ and I walked under the beautifully decorated phoolon ki chaadar held by my mamu, cousins & friends albeit directed by my mom (:P), indicating the way. The shehnai-walas orchestrated a familiar melody & the song changed to ‘Inn lamho ke daaman mein’ (from Jodha Akbar), as per plan. The only thing not planned those two days was the rain, which restricted us indoors for most parts.

Soon after the jai-mala, we shifted base to the mandap for the pheras, where the never-seen-before joota-chhupai was orchestrated, and Arjun’s shoes were rampaged upon by my cousins & his friends who wouldn’t let go off them. We were greeted by the panditji, second time in the day, who went
about his rituals with absolute resolve. Like puppets to his command, raising precisely the hand or leg (left or right) he asked us to, we complied. His anecdotal self with ‘heart-to-heart transmission’ & other promises we repeated after him, were hard to miss. The ceremony concluded with flowers being showered at us, post which we sought the elders’ blessings.

We met other friends , and some ‘candid’ photography sessions later, we hit the dance floor where the live rapturous band ‘Rodrigruez’, played some wonderful music, and recreated magic with a medley of Hindi & English tunes of the golden times. The buffet was exhaustive, and I would have
been one of the exceptional brides who had dinner twice on her own wedding :P. The dinner tables were replete with talks of the laal maas, baati-churma, Lebanese live counter (from a day prior, which incidentally went unnoticed by me) & paan, as raving highlights.

Slowly, but quickly, it was time for vidai, as I threw handfuls of wheat husk behind, the ritual signifying that prosperity and wealth stay intact for my family members. With a carnation in my hand & best wishes of near & dear ones, I sat in the car, which zoomed off to the Western Court hotel, our abode for the past few days now. A formal closure to the ceremonies was implied, but for me it was just the beginning.

A journey, starting much before the ceremonies began till each function embarked upon its significance. Its surprising how months of planning just go by in a jiffy, and while you are still sifting through the madness along the course of it, all you are left with imprinted on the sands of time are
indelible memories relived through photographs that you’d glance through while sipping tea, or extract randomly, snuggled in bed soaking in the warmth of your loved ones.

As for my wedding, well, it would surely go down memory lane as the few, that DID happen in 2020 (just before the go-corona-go wave hit). And so, until the world restores to ‘normal’, hold tight, fasten the ropes and wrap your loved ones tight, not just in difficult times. Happy quarantining! #stayhome #staysafe #loveyourjourney #spreadlove

Weddings decoded – what all the fuss is about! #wedmego(o)d