Things to do in Jodhpur and Jaisalmer: A chip off my traveller’s block 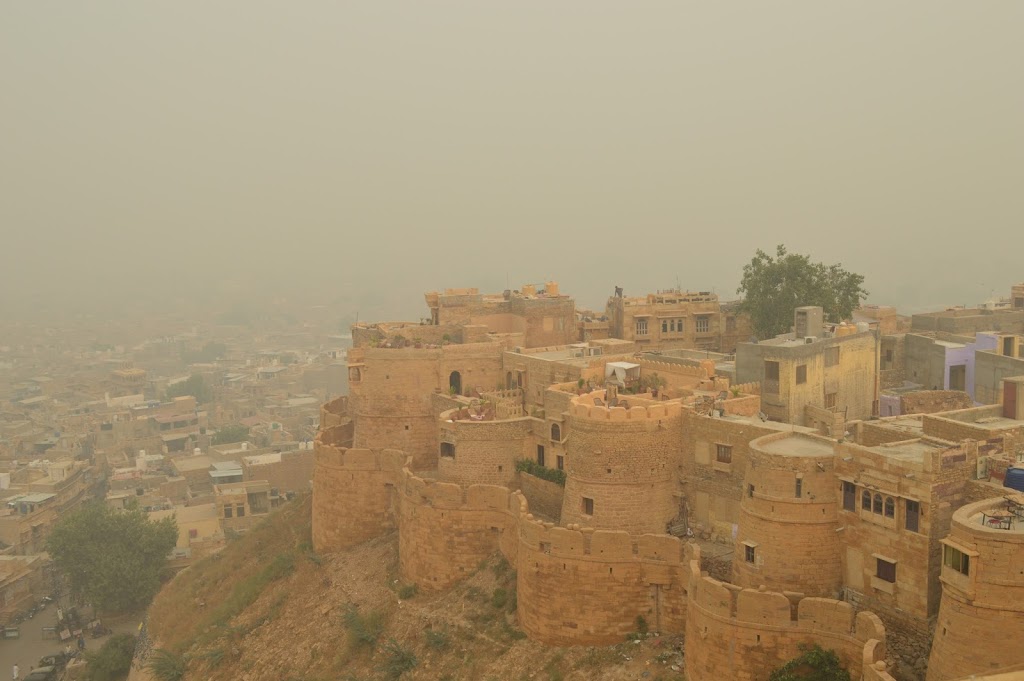 So this blog post comes as a double treat for all those who revel in ancient architecture, history, local culture and bonhomie. Jodhpur and Jaisalmer are known the world over as the keepers of historical traditions. Only when we ventured into the quaint towns did we realize why.

The drive to Jodhpur is quite smooth except for the long hours, which by now having done quite a few road trips, I’ve got comfortable with. The breaks replete with sandwiches and tea/coffee by the car-side are now a common feature of most of our journeys by road. And when it’s Rajasthan, add to that pyaaz kachoris, meerchi pakodas and you’re sorted!! As we hit Jodhpur, we wandered our way to the Officer’s accommodation, where we were placed for the night. We freshened up and decided to have dinner out at ‘On the Rocks’. The entrance was rock-shaped and there was a light music playing in the background, setting the mood for a perfect evening. Dinner with dim lights under the night skies, and trees around echoing the sound-recorded version of a bird’s chirping – Jodhpur had already set the milieu a notch higher. 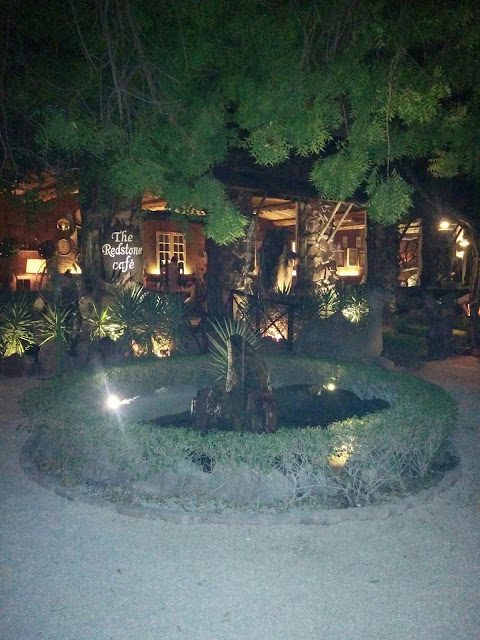 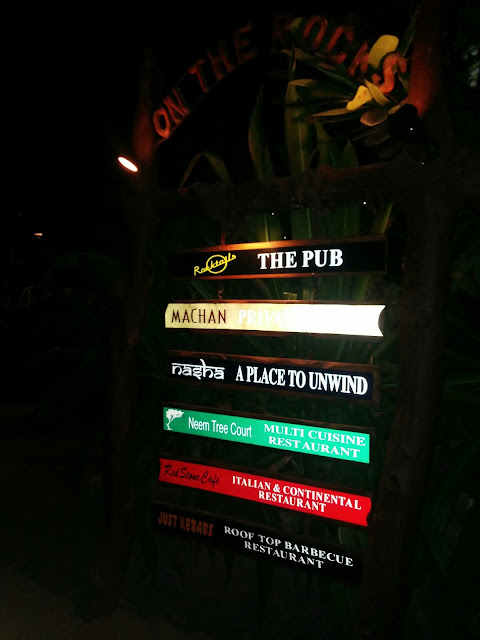 The next day brought with it its own share of excitement. Venturing first towards the Mehrangarh fort, we decided to take a tour guide. First of its kind where a lift takes you to the top, the fort stands at a height of 400 feet above the city. Built in 1459 by King Jodha, it is enclosed by imposing thick walls. With the entire town in sight from the ramparts, the mighty skies seemed to bow down to the swell and pride of the mystical fort, overlooking the ‘blue city’. For once, I did not mind the Monday morning ‘blues’. 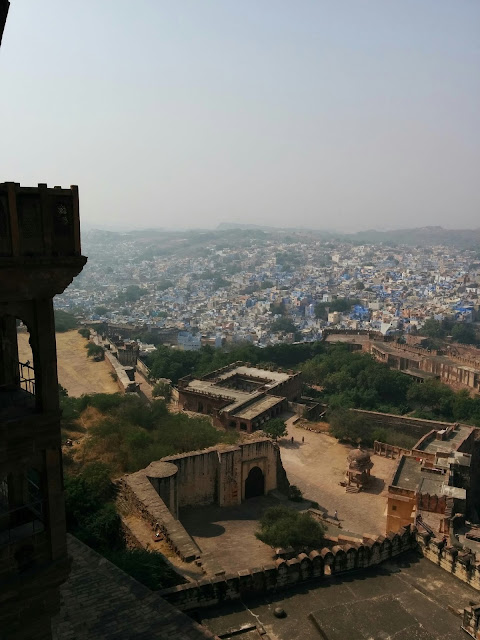 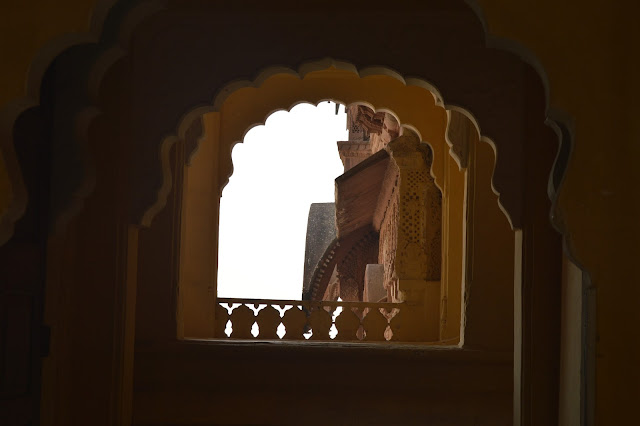 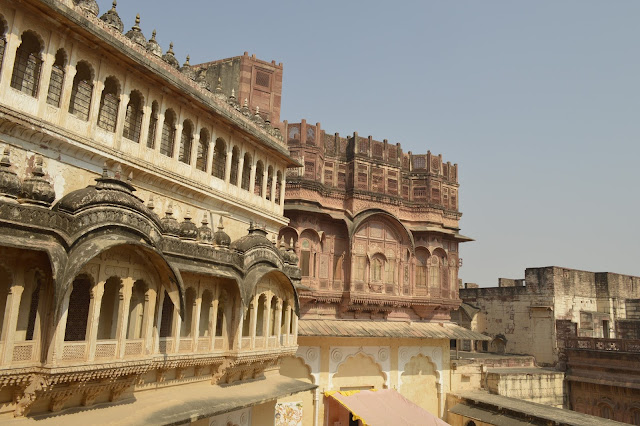 Mehrangarh exposed us to the fervent flavours of history found in the jharokas, period rooms (meditation room, Moti Mahal, Phool Mahal), and various galleries. There was a gallery housing royal palanquins and howdahs (elephant seat) including the one presented by Shahjahan to Maharaja Jaswant Singh of Jodhpur as mark of special honour. The Daulat Khana housed some of the most intricate collections of fine art during the reign of Rathore rulers of Jodhpur who maintained close ties with the Mughals. From huqqa base, canons, costumes, to fire cup – chillam, it displayed various tastes of royalty. The paintings gallery displayed the finest Marwar paintings while the armoury showcased swords and stones-studded shields. 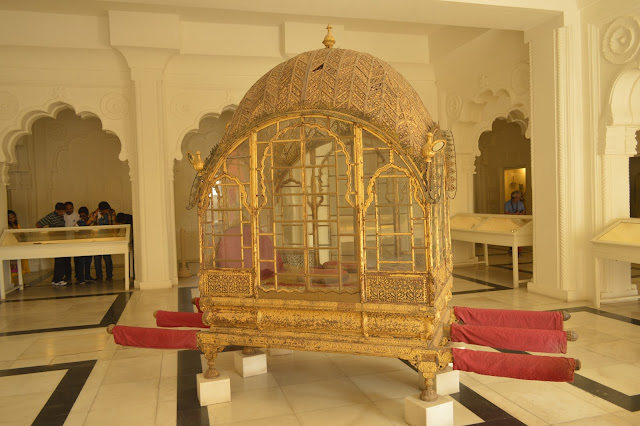 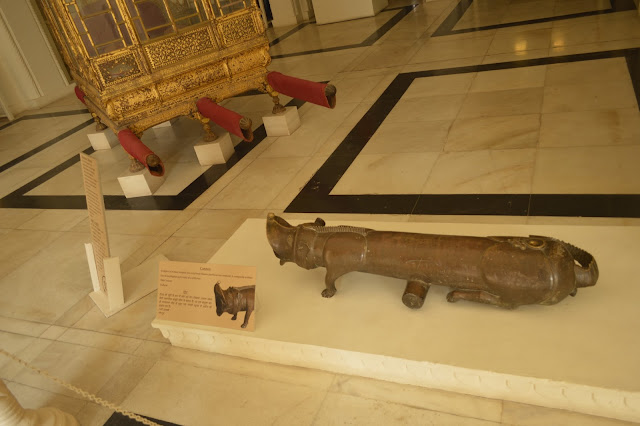 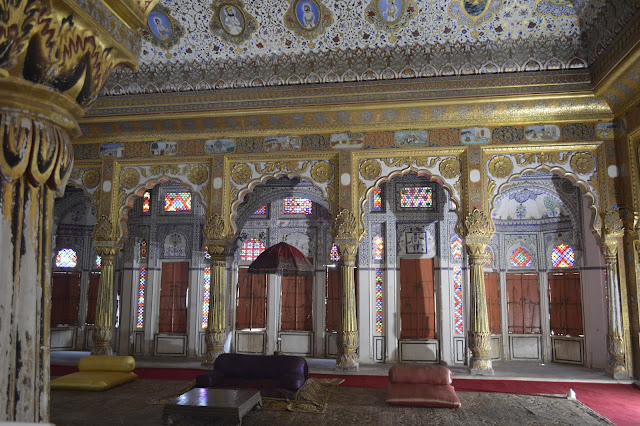 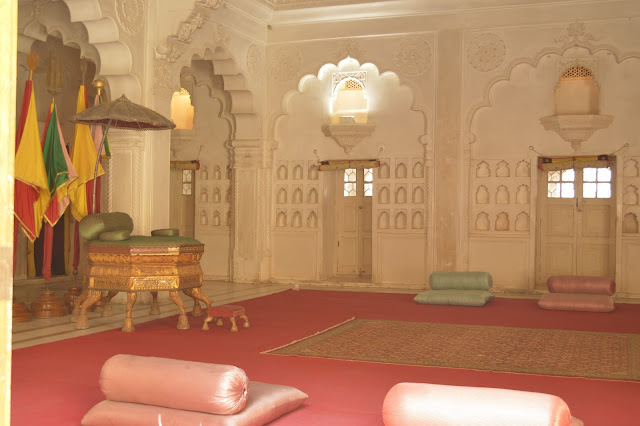 There’s music too that can be heard in the corridors of the fort. This emerges from the other side of the fort (the entrance, which we used as exit) where the locals are singing to the tunes of ‘Padharo Mare Des’ and ‘Nimbuda Nimbuda’ with a Rajasthani touch. I also sneaked in some shopping promoting the local crafts, with the mutli-colored tie-dye dupattas, camel-bone earrings and colourful lac bangles. As we exit through the mighty gate of the fort (the fort has a total of 7 gates, each with own historical significance.), we couldn’t help revelling in its brilliance. 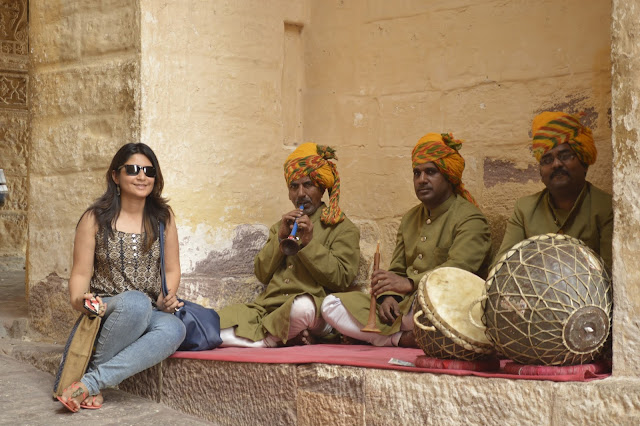 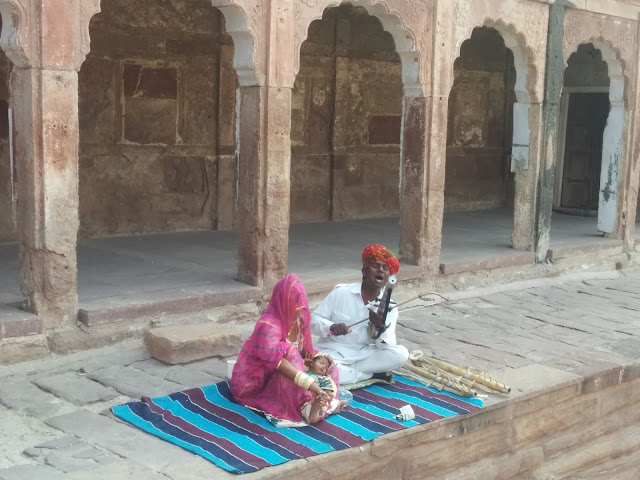 The same evening we went to visit one of dad’s coursemates posted at Jodhpur, and later dined at ITC Grand Chola. Not in the mood for heavy food, we picked at Continental and digged into the pastas, prawns and breads, lacing it with a round of tiramisu. Nirvana was thus attained. 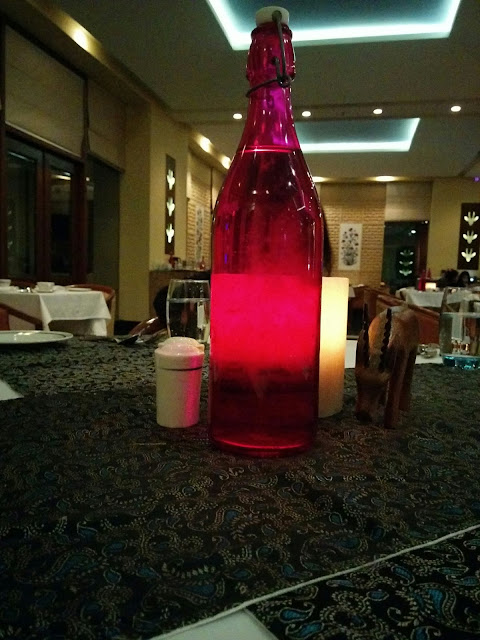 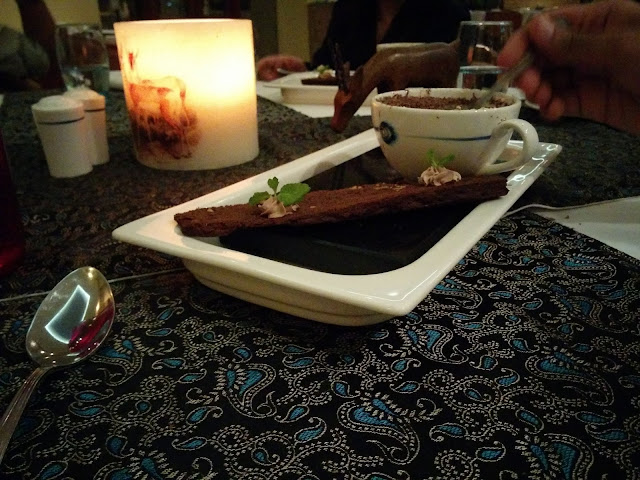 Another round of quick packing, and we hit the roads again, early morning and headed off to our next destination – Jaisalmer. 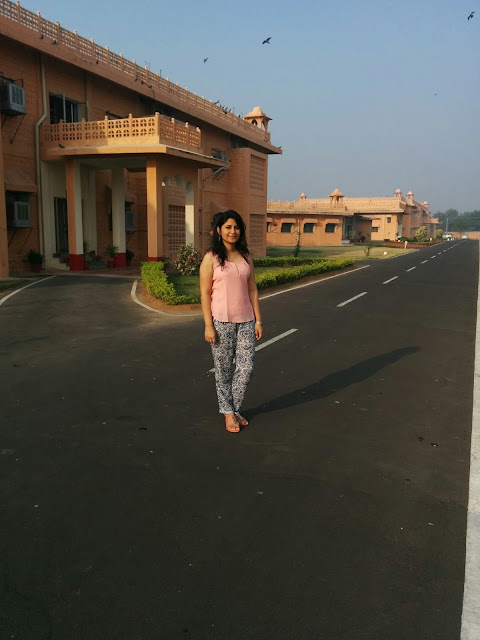 The drive to Jaisalmer was particularly delightful for the fact that we encountered a rare sight. The largest herd of camels hailing from the deserts galloped on the roads as if newly introduced to modern day cities. Jaisalmer, aptly called the ‘golden city’ basked in the day light and shimmered by night. Notwithstanding the dirty lanes, the Jaisalmer fort is truly one of its kind. 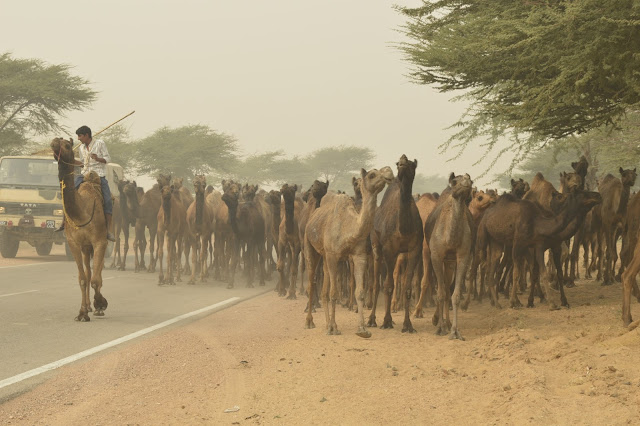 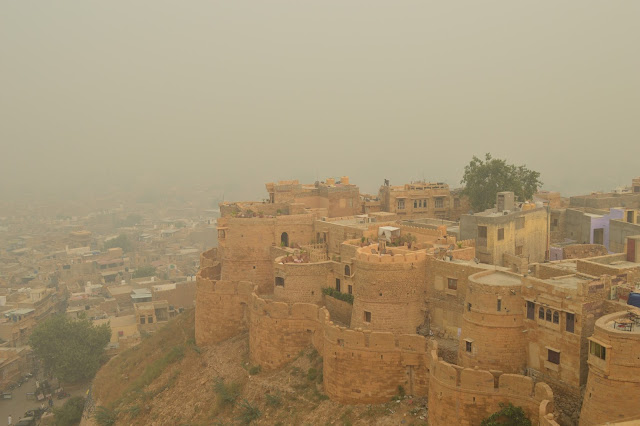 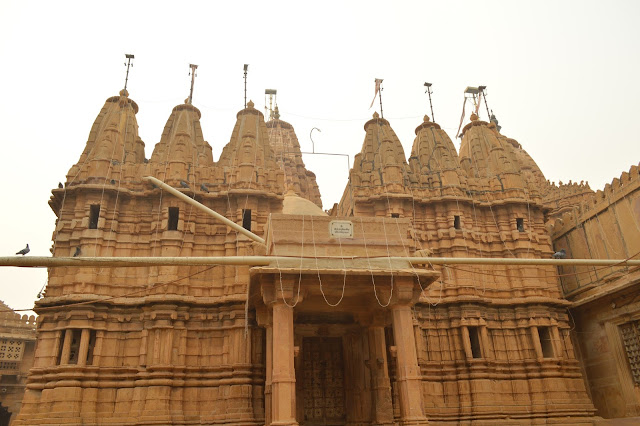 If I were to draw parallels between Kumbhalgarh, Amer, Mehrangarh and Jaisalmer forts, this one particularly stood out for it’s the only fort that stands amidst the township with people’s homes, a few rooftops with running restaurants, including a few ancient temples inside the fort area. Another one of its peculiarities is the yellow sandstone walls and the looks of a castle that are a hallmark. Rawal Jaisal strategically built the fort on Trikuta Hill, a massive rock rising 75 meters out of the surrounding sands. Containing three layers of walls, it served as a power-backed defence for the Rajput warriors with the enemies often getting entrapped between the second and the third walls. The tour guide acquainted us with the spot where the Rajput women committed jauhar (self-immolation), consequent to the fort being attacked and captured by Ala-ud-din-Khilji in the 13th century. The fort was under the control of the Mughals until 1762 when Maharaja Mulraj took control of the fort, until his death in 1820 when his grandson Gaj Singh took reigns of the fort. The Maharaja Gaj Singh presently resides in Umaid Bhawan Palace in Jodhpur city. The Royal Palace where the Raja performed his daily activities stands intact. One of the largest and most notable structures is the Laxminath temple that lies in the interiors of the fort. The by-lanes display colourful bags, footwear, and puppets hanging against the yellow sandstone. 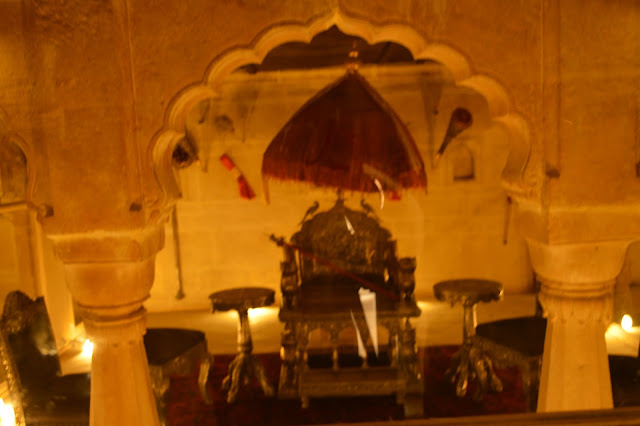 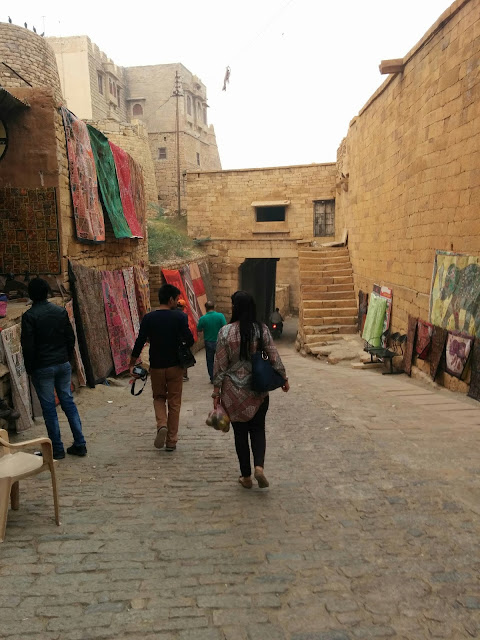 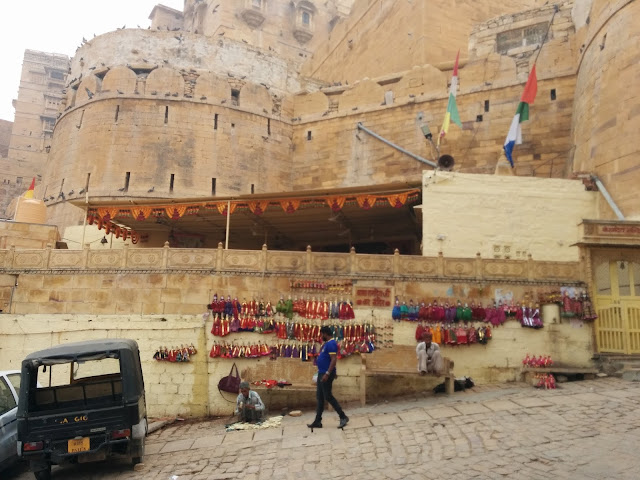 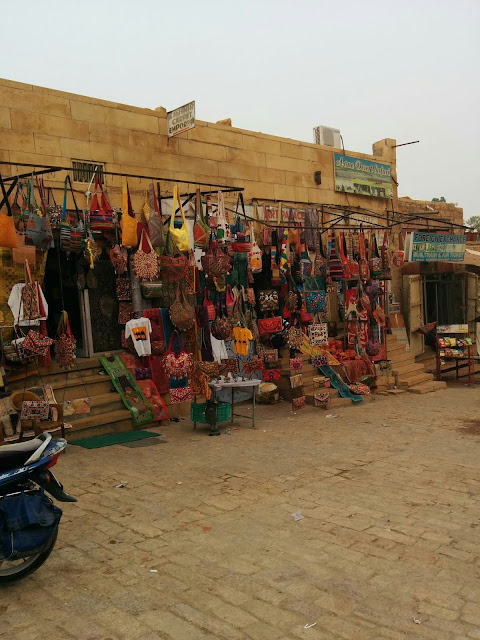 Next, we headed for the Sam sand dunes area, lined by desert safari camps, with the owners persuading you for a camel ride, dune bashing on the jeep, and what not! We were quick to label them the ‘marketing team’ of the camps. Within minutes of stepping outside our car, we were pulled onto an open jeep ride tailing the expanse of the Thar deserts. And so we zoomed up and down at varying heights, dune bashing and screeching with every turn. Although it was nothing to compare against the Dubai desert safari, yet it held its steam, and we swayed across the huge expanse of the beautiful Thar. The vast stretch of the road ahead with sand dunes in sight on either side of the road at dusk ensured a lovely drive back to the city. 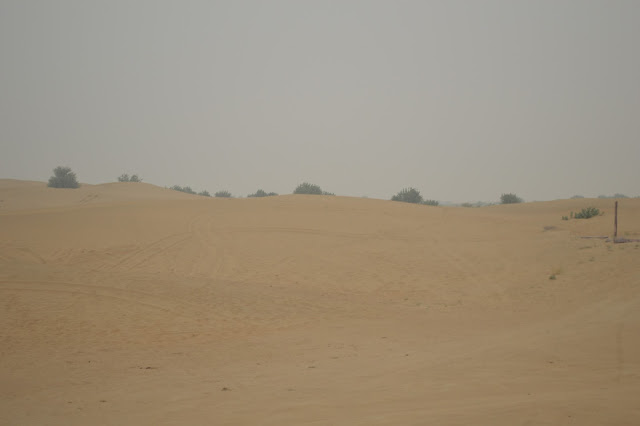 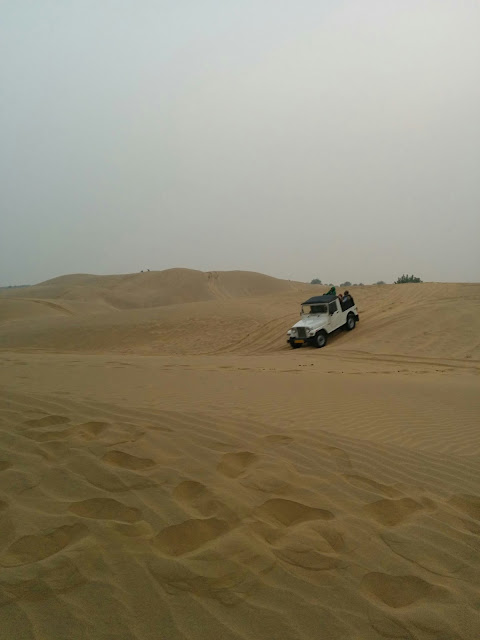 After resting for some while, we got readied for the last standing adventure of the day – scrounging through the lanes of the city for places to dine at. Having run google searches, checking ratings on trip advisor sites, rejecting some, we finally placed our bets on Hotel Nachana Haveli. The food was sumptuous, our palette a mix of Italian and Indian, with the spacious rooftop arrangement adding to the ambience. 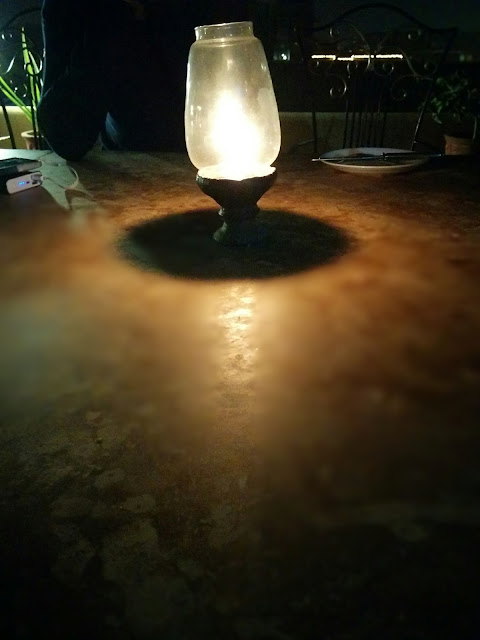 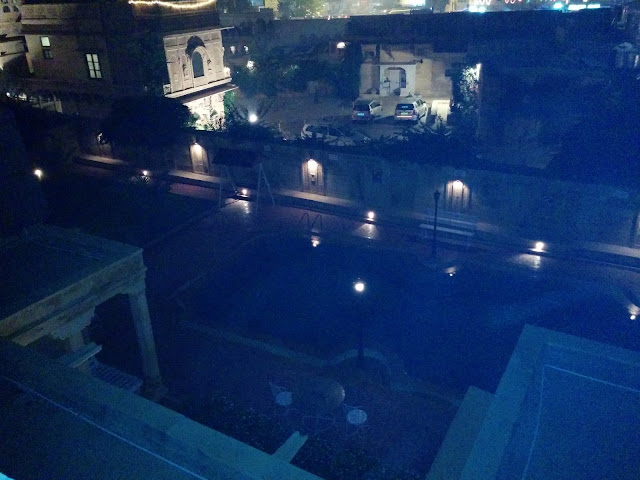 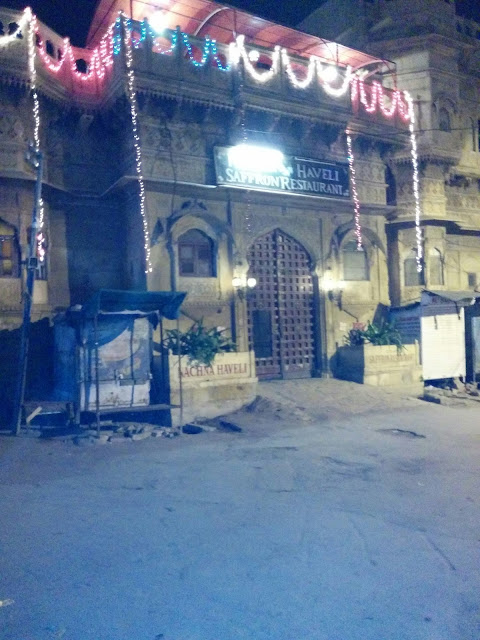 Another remarkable feature of the golden city is that it houses many a havelis. Some of these havelis are eons of years old. And so with our satiated selves, we strolled past the by lanes of the city in search of the Patwon ki Haveli. Being the first Haveli erected in Jaisalmer, it is a cluster of five havelis. A renowned and rich trader of his times, Patwa constructed the same. Glowing in the street light, it is replete with individual depictions on each and every arch, and carvings very detailed and intricate. It is now occupied by the government and houses an art and craft department within the Haveli itself, as one of the workers there put it, in all enthusiasm. 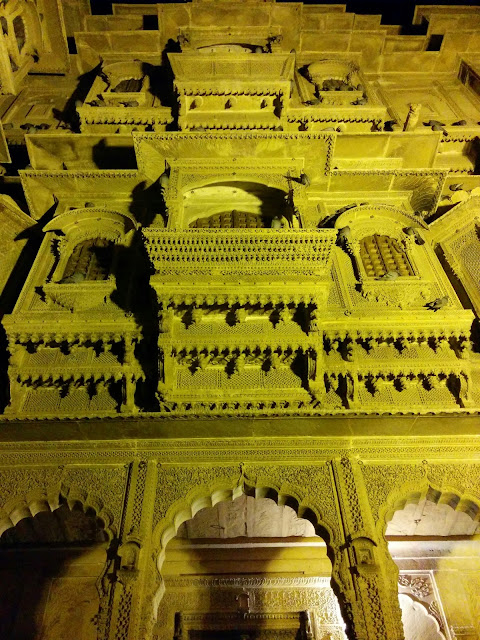 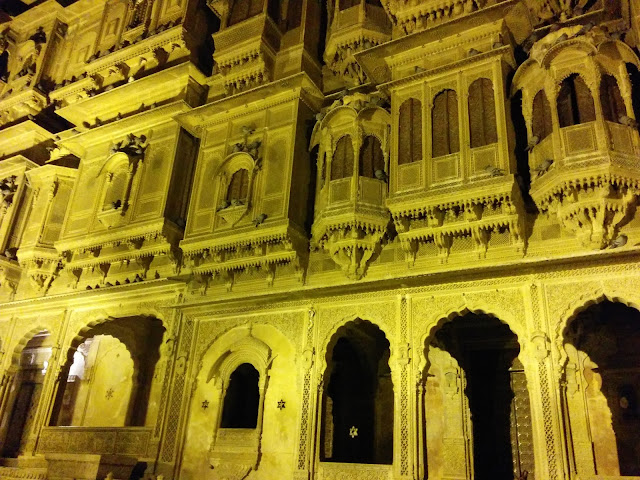 Halting our journey in parts on way back the next day, our enriched selves reached Ahmedabad at 6 p.m., just in time to bring in the Diwali celebrations.

My latest tryst with Yoga

To happy tidings and turning 24!