“When in Rome, do as the Romans do”. There couldn’t have been more justice done to the popular saying than when one sets foot in Ahmedabad. Whether it is do with driving, the food, festivities or simply the ‘Kem Chho’, every ounce of this city bites you like a bug. Barabar (insert Gujju accent)!

If I were to choose two things that set this place apart from the rest of India, it would undoubtedly be the food and the Garba! Not like popular food options are not available elsewhere, but the typical foods of this place, in all its authenticity and flavor can be found nowhere else. The golgappas and papdi chaat of Gwalia, the creamy all-flavored ice-creams and kulfi from Havmor, the bhajias from the prison shop that sells wares made by inmates (a separate ‘Ladies Line’ helps to beat the heat & get the much savored bhajias in no time!), the khakhra and fafda from Induben Khakhrawala, dabeli, vada pav, masala bun & theplas, Khaman dhokla from Khaman House, frankie from Upper Crust, the famous undhiyu – all the local food that would leave you asking for more (don’t blame me if you’re already drooling)!

Popular food joints, the likes of Gordhan Thaal, Atithi, Agashiye, Vishalla – for the typical Gujarati Thaali, Tomatoes (Continental) , Patang – The Revolving Restaurant(though except for the view, personally wouldn’t recommend it ), Toritos (Mexican), Souq (Mediterranean/Lebanese, The Taj Gateway Hotel(recommended for buffet)- all have a unique experience to offer! 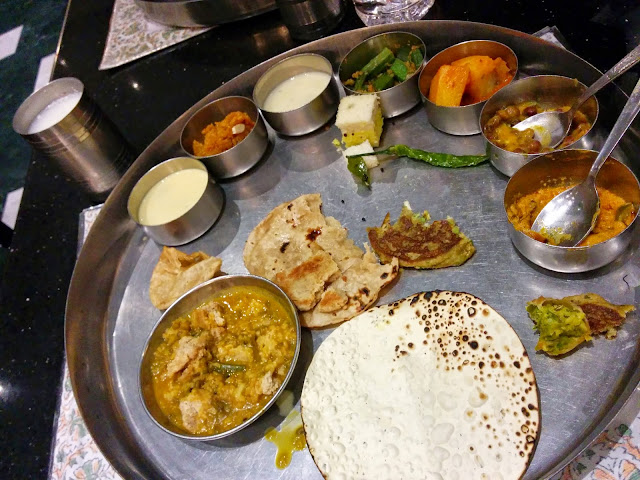 There is more that goes into the making of the Gujarati thaali than what meets the eye. An assortment of dishes – the kadhi, sabzi, khichdi (rice and lentil), aamras, pickles, chaas(buttermilk),daal-bhat-rotli – the thali eventually looks like a colorful palette leaving one confused where to start and where to end (if there is one that is!). The Gujarati dishes have a typical blend of sweet, spice and salt simultaneously. Wonder if its a reflection of the localites who impress you with their sweetness, surprise you with their spice like sharpness, and well, in the end astound you with their sense of business – ‘take us with a pinch of salt’! A deadly combination, I’d say. 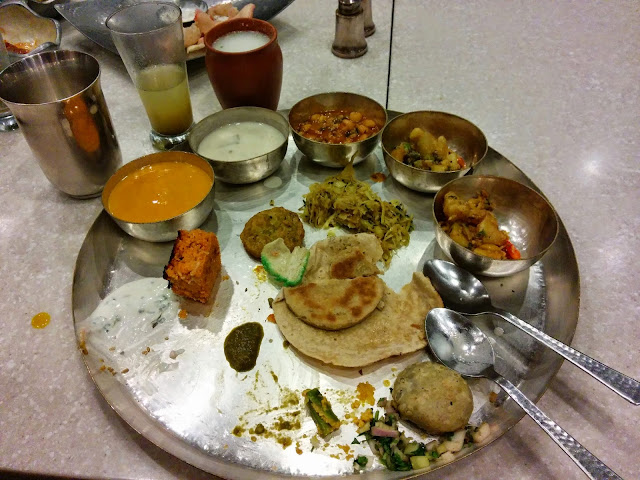 Every thaali has its own specialty. But what makes the experience unique is the oodles of affection that evidently percolates in the amount of rotla(i)s (made from bajra, typically ‘millet flatbread’) on your plate – dipped and soaked in ghee! The more the ghee, the more the love. 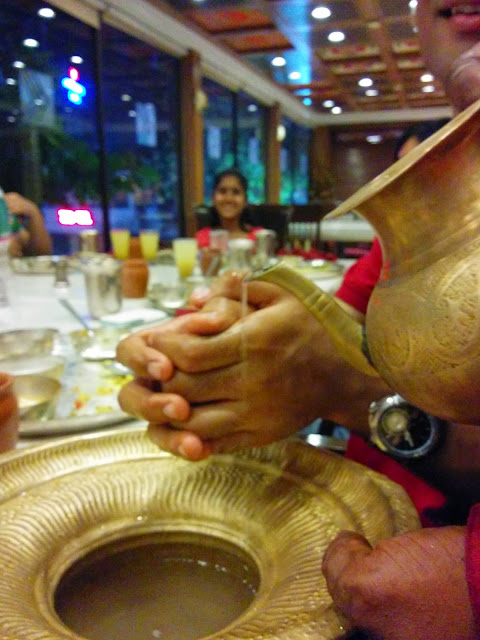 Washing hands the traditional way serves as the befitting end to the Thali experience. A large copper jug filled with warm water for cleaning hands – haven’t been privy to a more grand hand-washing experience before!

Giving tough competition to the food is the famous Garba. And when the two combine – the time of Navratri (9 nights) – it is a of riot of colors, festivities and fun. The entire city rises to the occasion, the zeal and mood is hard to miss & match. 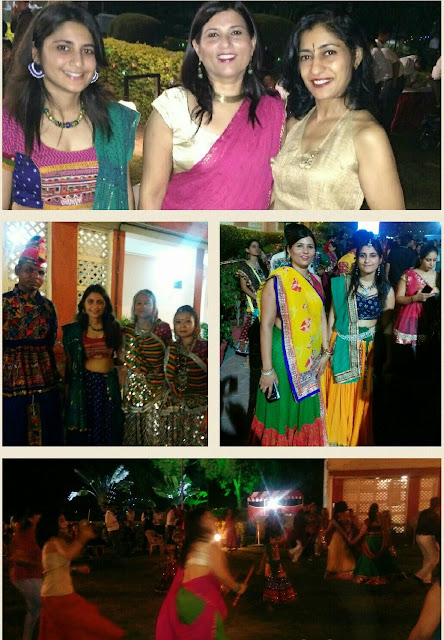 I found myself matching foot steps to the tunes of Sanedo (Gujarat folk music)and other peppy beats! I particularly enjoyed the time at the officer’s institute within cantonment (GKOI), whereby we indulged in all the song & dance (for the first time the focus wasn’t food). It was only a few minutes before I found myself mastering the basic steps. Dancing in a big circle, with everyone playing the part, and a professional group adding to the authentic vibe with hand movements/claps and dandiya sticks, the energy was palpable and it was hard to stop. The beautiful mix of traditional songs by professional singers and the groovy bollywood beats by the DJ served as perfect background music to the dazzling night. 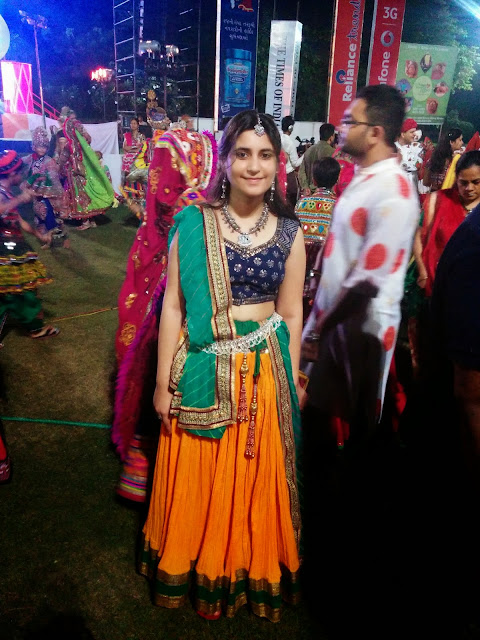 Dressing and looking the part is equally important. Its as exciting to collect all the necessary accessories (necklaces, jhumkas, kamarbandh, silver anklets, bangles) and clothing for the days, as it is to let loose and be one amongst the crowd. Though casual kurti-pyjama does the trick, the typical dress for men is called kedia- with embroidered sleeves and flare on the bottom, worn with kafni pyjama. Though most women wear chaniya choli, its not surprising to see them dressed in multi-colored ghagra, lancha or even a lehenga saree. Besides hunting and tracking down shops like Bijouri and Sanskruti for the attires, I thoroughly enjoyed Law Garden night market shopping for junk jewellery. 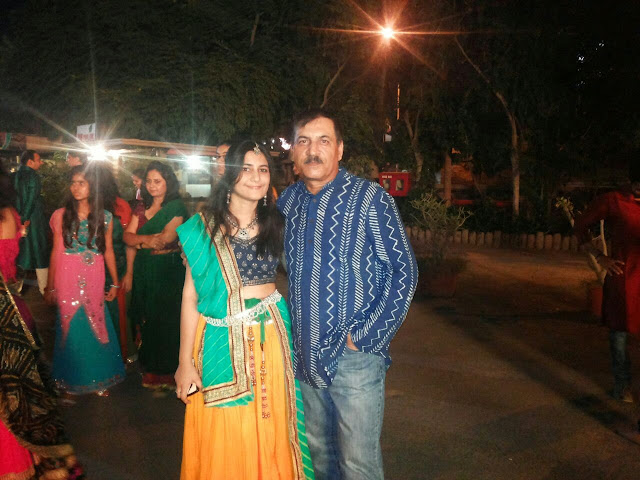 At the entrance, Karnavati Club

With an introduction like that(function at the army institute), I was ready to make room for more of the grand 9 nights’ function!! We geared up for the next event (fourth or fifth night) at the Karnavati Club. It was an eye-opener to the grandeur of all that is Garba and Gujarat. 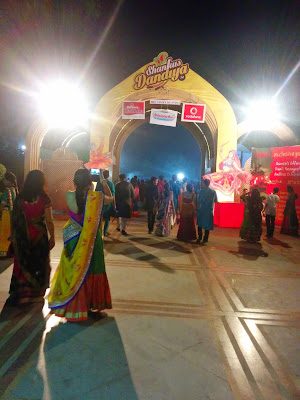 Entry gate to the action-packed lawns 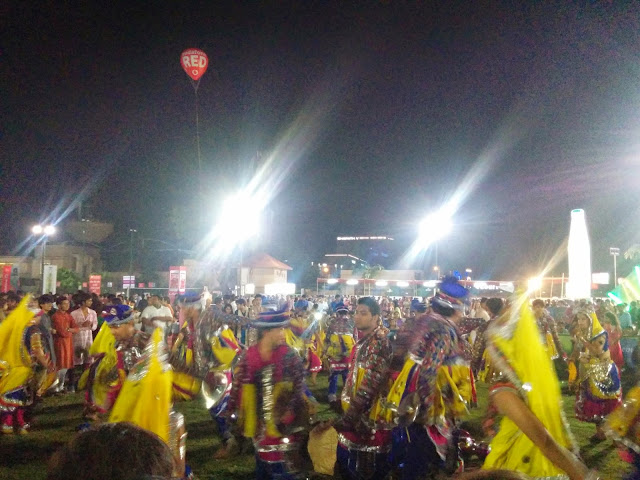 The professional dancers from all parts of Gujarat – Baroda, Bhuj, Kutch et al. swayed and swirled in a circle, the dress and dance a distinguishing factor. Foreigners, locals, tourists – everyone alike jived to popular songs, in groups of their own. The place was packed. 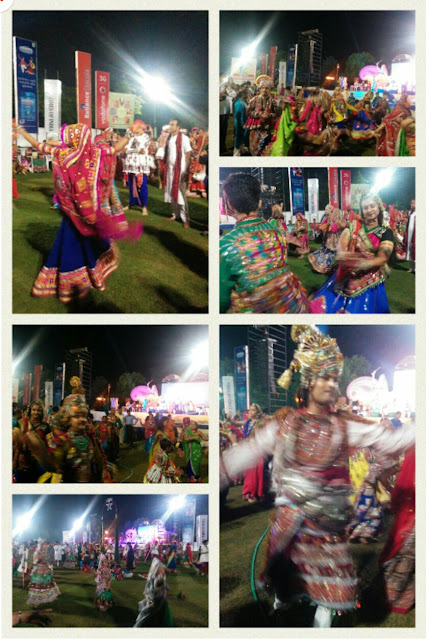 While I was a bit lost in the middle of it all, the excitement to be witnessing a spectacle of an event like that was enough to give me goosebumps. Colors, music, feet-tapping, hand-clapping garba were the hallmark until the night grew to a crescendo of stick-clacking dandiya raas.

Not wanting the night to end, we left the place around 1 a.m. The scenes on the road on our way back left me pleasantly surprised. Not only were the girls comfortably seated in the traditional dresses on a two-wheeler behind a guy, or better riding one themselves, there was not an iota of eve-teasing or hooliganism on display on the roads – and this minus the police. To me, what I witnessed hours before and that very moment marked the essence of Gujarat.

With hope in my heart and a resolve so solemn, I decided to be back in action next season for not just one or two but all the nine nights and into the dawn!!