How much can you pack in a weekend?

A road journey(which covers travel), a stay at Le Méridien, Jaipur (which covers luxury) AND a wedding (which covers fun, food and colors)! And this without the conventional touristy garb of going from place A to place B and checking a tick on the must-dos.

We set out for Jaipur,a drive of 675 km from Ahmedabad, covered in approximately 10 hours. Tired as we were, we just wanted to reach the Hotel fast. Having hit Jaipur, the idea of an hour’s travel at least to reach the outskirts of the Pink city, Le Méridien – the wedding destination, seemed like a task in itself.

Moments of landing at the Hotel, and all our tired spirits vanished into thin air to give way to the more up-beat selves, excited to be a part of the grand extravaganza. On reaching our room, a basket of goodies and a rose petal dipped in silver with a welcome note greeted us. We freshened up, changed and headed straight to the function which was buzzing with action already. 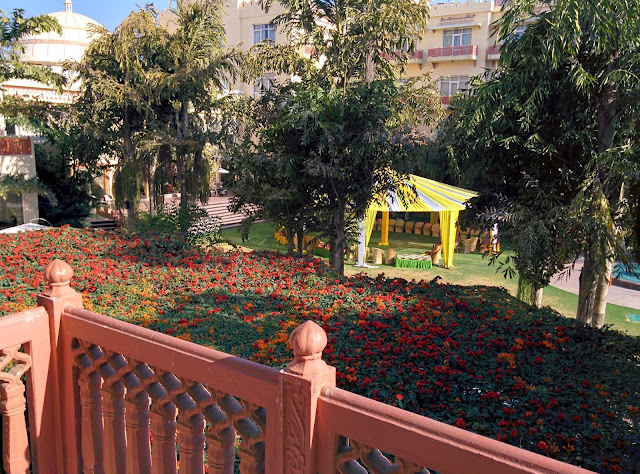 The poolside view from the balcony of our room

The afternoon was abuzz with chatter, drinks,street food and a brilliant decor with colorful props of puppets and marigold flowers, complimenting the ‘Mela’ theme. A breezy set-up and mood to match, it was fun witnessing the haldi ceremony moments later. The palpable laughter, fun n frolic, and smiling faces. 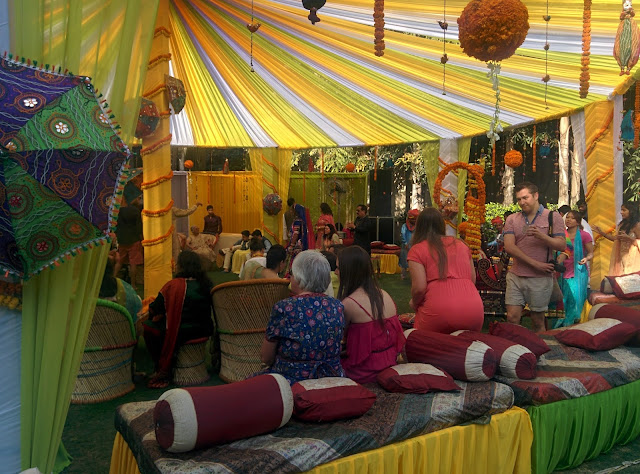 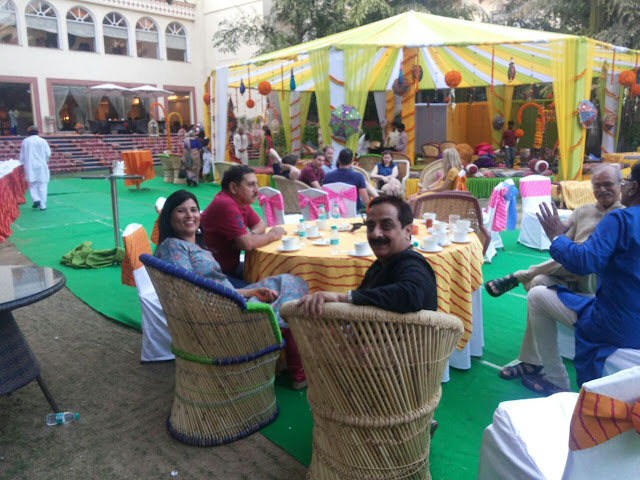 Later in the evening, and after an hour of dolling up, we were amidst the most gorgeous set up of blue lights, white carnations’ decor, and happy faces. The happiness was part attributable to the free alcohol on the house and part of course to the lovely get-together. The stage was set and a couple of power-packed performances followed. Bollywood music ruled and the performances such that would put the performers back home to shame. Londoners did their bit and grooved to the music. 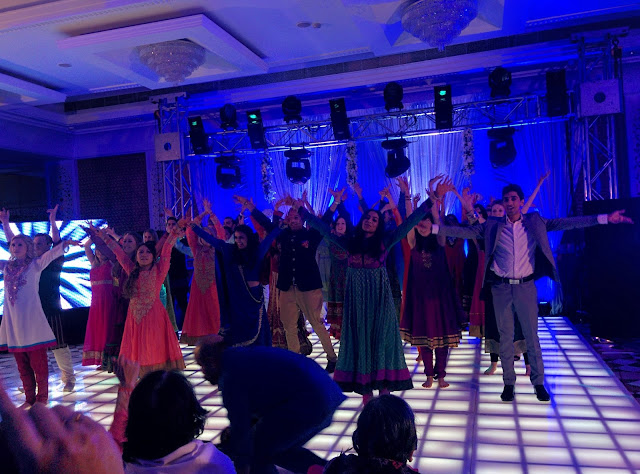 Everyone – young, not-so-young, old, et al. got onto the stage to shake a leg. Some shook, some twisted, some even broke by the end of it all. But the night was young!! The food was equally exciting – a lavish mix of cuisines from different parts of the world. Mexican, Continental, Chinese, Thai, Indian, Italian – a heavy palette, yet light! The desserts were heavenly… Nirvana was thus attained. 😉 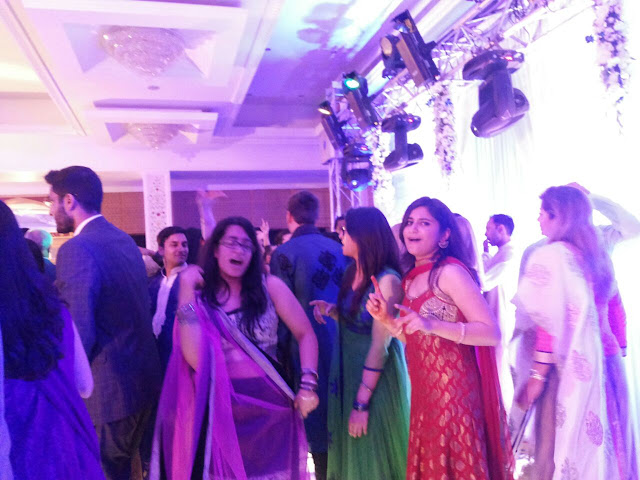 The next morning, which was a Sunday and D-Day, saw the bride dressed in a pretty lehenga, and us ready to witness the Choora ceremony. The sunny day was further brightened by the presence of the near and dear ones, singing the perfect songs and cozying up for the shutterbugs. 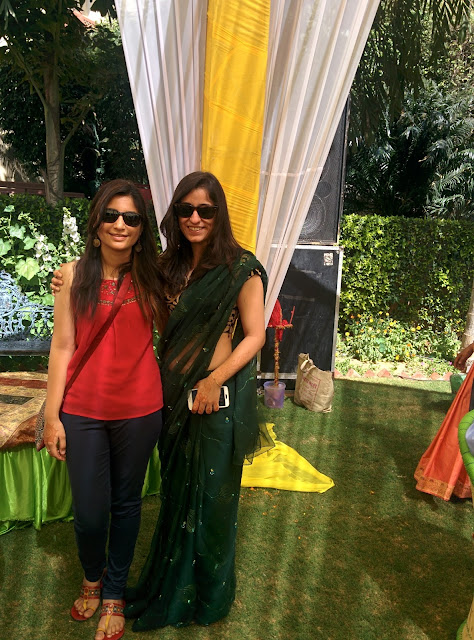 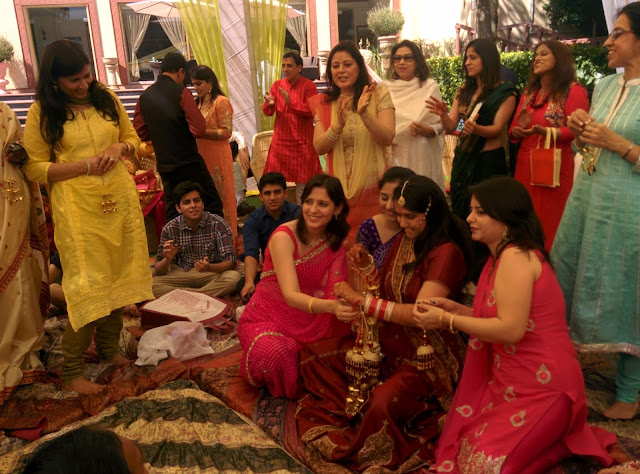 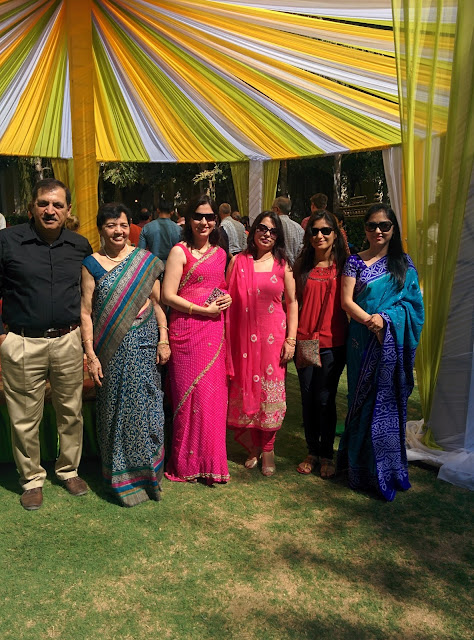 Next, we moved to the garden area where we had the typical Rajasthani thaali greeting us for lunch. An assortment of spread consisting of kadhi, daal-bhati-choorma, sabzi, lentils, khicchdi, dahi bhalla, pickle, desserts – it was a perfect recipe for ‘spoil with choice’. 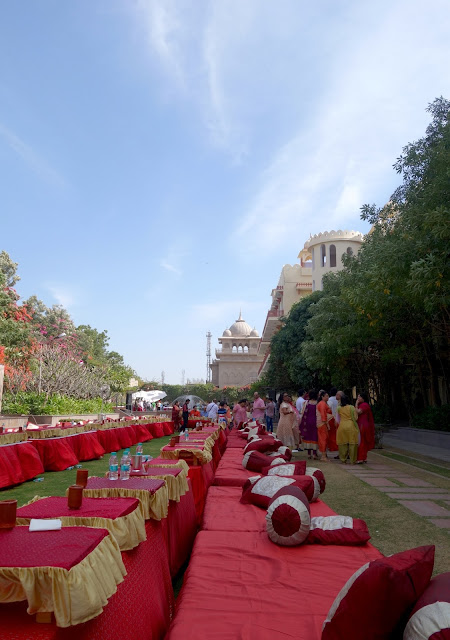 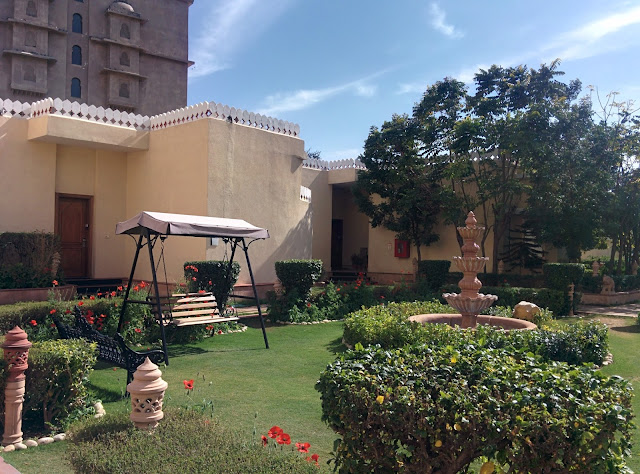 After resting for some while, we got ready for the next round of ceremonies, the main function – Baarat and the wedding vows. Clad in lehengas, the evening saw an amalgamation of colors, pomp and show. The groom arrived on the elephant with his relatives and friends dancing along (typically called the baarat), while we the girls were given the humongous task of not letting the groom inside unless he pays a hefty sum so he can get the bride. With echos of “Richa nahi milegi, nahi milegi” (rhymes that he shall not get to take the bride along) and a few laughs here and there, settlement was finally reached, and the groom let in! 🙂 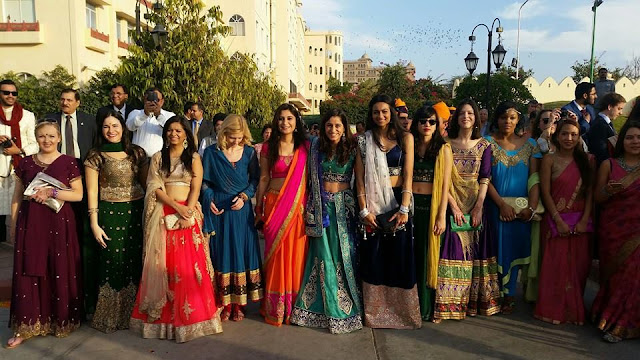 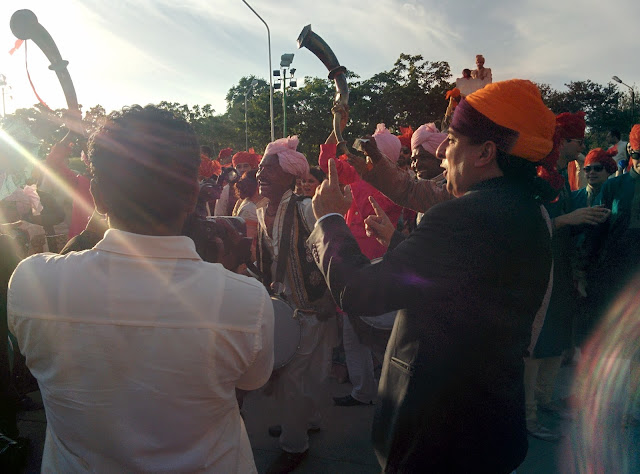 Minutes of waiting, anticipation turned into jaw-dropping gasps as the bride arrived, beautifully clad in pastel shades of green and light pink. The lehenga was subtle, yet gorgeous. Confetti was showered upon, and garlands exchanged. The air drone did its job and captured the candid moments in all its glory! 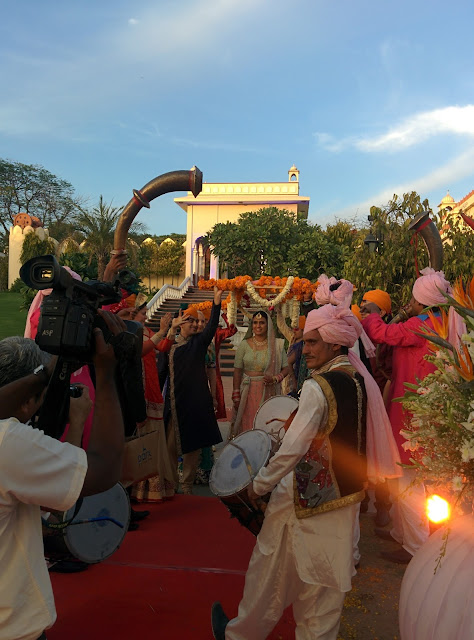 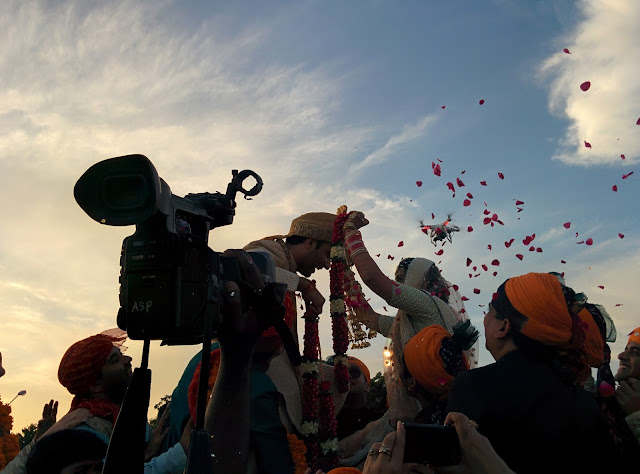 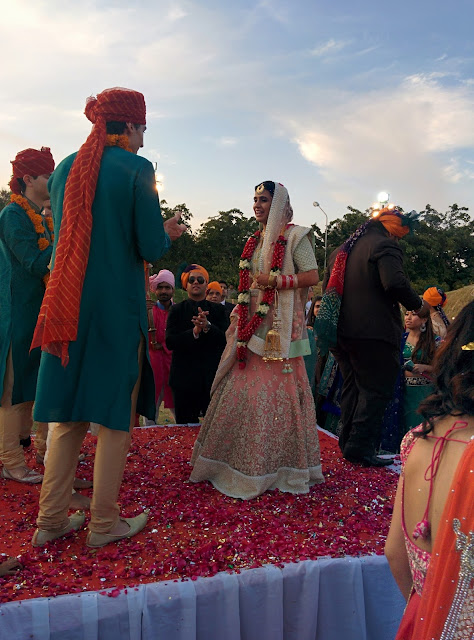 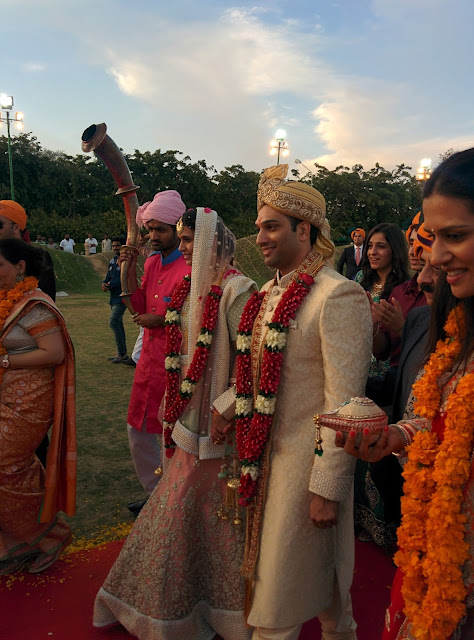 The mandap was adorned, and received its rightful occupants who were ready to begin the wedding vows in the presence of the pandit and the gathering. Surprisingly, this part of the ceremony turned out to be quite hilarious. The fun began when the bride and the groom were asked to narrate the hindi vows in English, agreeing to a 7 pointer on the list. This included not looking at other girls and accepting them as his sisters, not indulging in degenerating activities, earning sufficient income for the family, et al while the girl requiring to take care of household activities, not looking at other guys AND that’s when Richa agreed to come on Gaurav’s left side. This was epic! 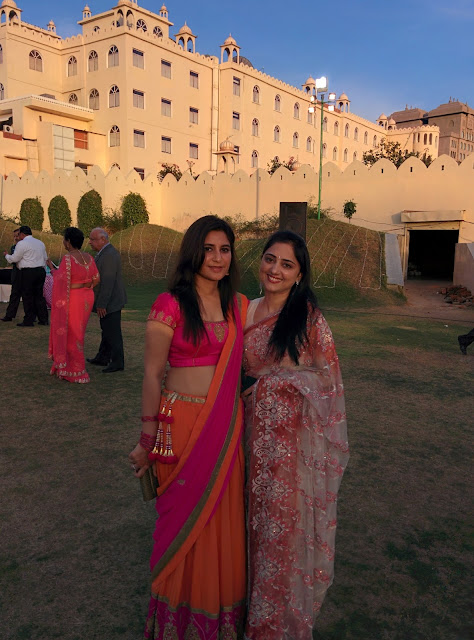 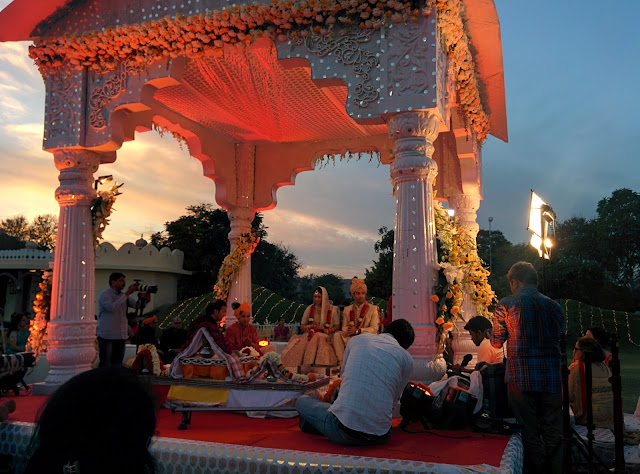 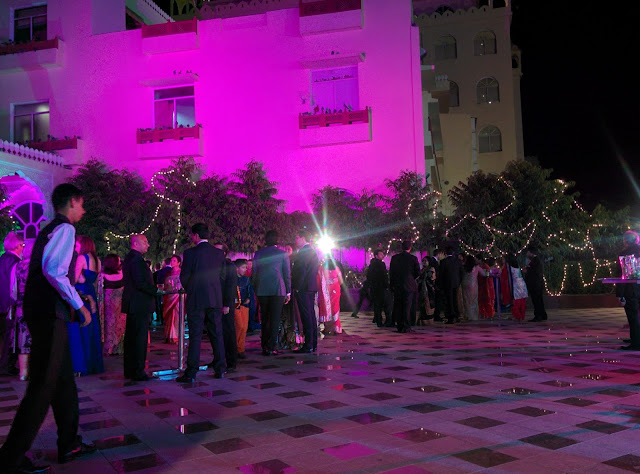 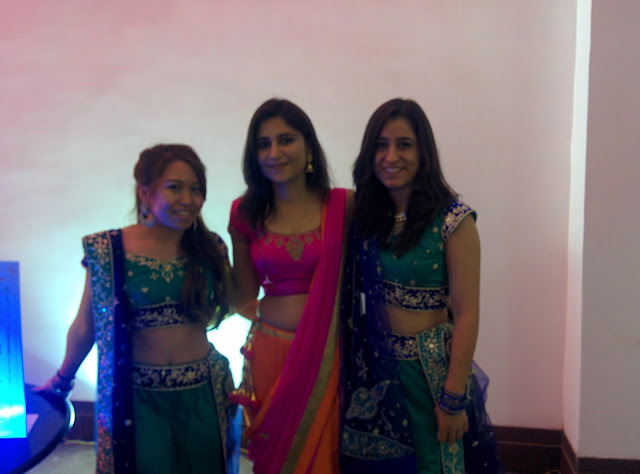 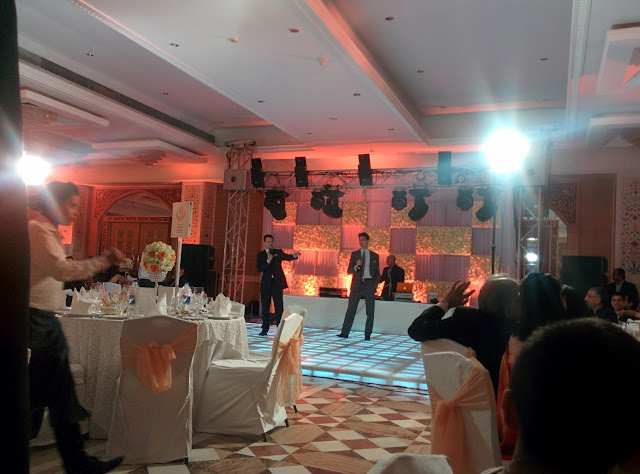 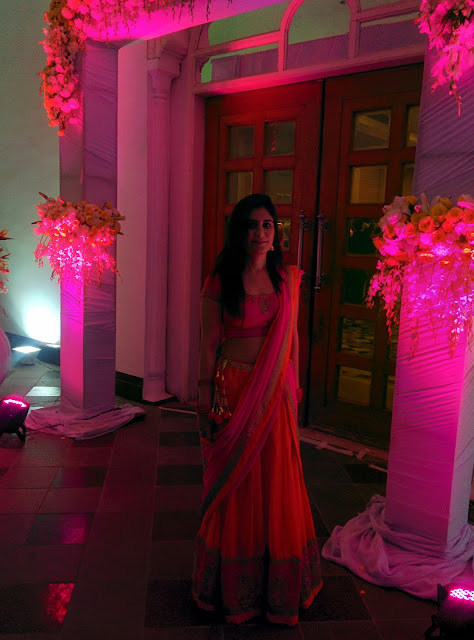 The two day function, indeed ended on a high, several notches up from when it had started just a day back. Four power packed functions in 2 days, with utmost detail and precision. A dream wedding, and a pleasurable experience. My biggest takeaway from the weekend wedding – Experience matters. As the night turned into the day, we packed our bags – ready for the road trip back home, had a meaty breakfast, and closed another chapter of a memorable experience and the wedding of a lifetime!

My first brush with Bombay