The Land of Lama!

It’s interesting how a brief moment of interest in something triggers a series of events in your life and you have things flowing by, like it was all a part of a divine plan. And so entangled somewhere in between the cobwebs of daily existence, I stumbled upon that something interesting (more on that later!) and thus the birth of this post…something I have been wanting to write since a VERY long time! It comes as a re-collection of memories, but like they say memories are all we have, and this one particularly I wouldn’t want to trade for anything! 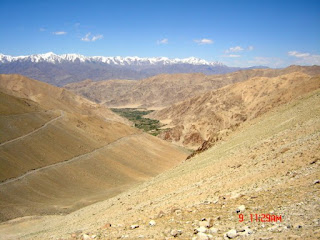 The experience remains a rich memory that I cherish till date. Stretching our course from Chandigarh to Leh in an IL-76, seated therein not so comfortably on wooden planks amidst a heap of wooden boxes filled with onions (yeah! We had onions for company, separating the two rows of people seated on wooden planks, facing opposite each other, with very less room for even peeping outside the window!). Landing at the Leh-Ladakh airport we heaved a sigh of relief first, which was later followed by a gasp at the sheer delight we found in the breath-taking view that pictured before our eyes as we took the first step outside the plane. The spell-binding beauty of the bare mountains is a treat for the ordinary eye.

As we charted our route from the airport to Karu, approximately 45 km from Leh, we were filled with anxiety and excitement both. On reaching our abode at Karu, we realized, only too late, what we would call home for the next one month was going to be a shack-like accommodation in the midst of a military base, with a glass-window cabin outside the main entrance, overlooking the snow-capped mountains (thank god for that!). However, what we didn’t foresee was the time it was going to take us to acclimatize to the weather and the cold winds that were ready to take us down with them each time we stepped out. Not wearing a cap was a strict no-no, but thanks to the few precautionary measures that we were advised to take, the first 4-5 days swapping between the indoors and out-doors and managing even a game of badminton in the initial few days, we were ready to go!! 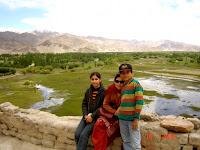 The initial days in the outdoors were tuff, not because of the cold or the harsh winds, but because of low oxygen! As we got more comfortable, and having already forged our initial journeys in and around the place, stretching across the Shey monastery and the Hemis Gompa, walking, climbing stairs and running (wherever we could manage), we were ready to take on more challenges. One of our trips, and the most exhilarating one at that, was the drive till Pangong Tso. Enroute, as we crossed the third highest motorable road in the world- Chang La (17,800 ft.), we experienced, for the first time, what thick, vast walls of ice against the downpour of soft snowflakes are made of! The prayer flags fluttering around, the check-post on our way and a tea-point are glimpses of memories that I can recall. 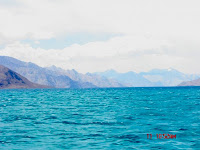 A night stop-over at Tangste gave us the much needed break we were looking for, until the next day, when we were headed for Pangong Lake. The different shades of blue on display is enough to spark a chemistry, and you find yourself lost in the vastness of the mesmerizing blue, that appears beautiful and daunting all at once! Despite the coldest winds there can be, one cannot simply resist the speed-boat ride across the expanse of the lake. And as one is seated in the boat, the spectacular view of the mountains tabling the blue is a sight to behold! In the beauty of the vast expanse, cold only becomes a diluted version of a feeling, as you find yourself lost in the length, breadth and the depth of the bigger experience that is Pangong Lake! 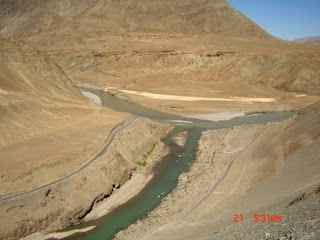 On another one of our journeys stretching towards the north-west of Leh, on the Leh-Kargil road, to Nemo, we experienced the rocky and mountainous terrain that harbored the holy Pathar Sahib gurudwara, the 32 loops ready to catch us in a swoon, called the jalebi mod (the road resembles the twisted shape of a jalebi, and hence the name), the Indus-Zanskar confluence and the ‘Moon land’, named after the moon-like craters found in the rough terrains of the bare mountains in the region.

Without realizing, our month-long stay at now ‘house’ turned ‘home’ ended and it was time to pack our bags and head back to blinding civilization. Our way back, we travelled by road to Delhi. Even though we did the opposite than most people would ideally recommend of reaching by road and returning by flight, I believe it was a conspiracy played out by the Gods to drive back home the point that if there was indeed heaven on earth, it was only in Leh Ladakh, and ofcourse whilst our way down-town, we did not forget the adage that proudly plastered the milestones in the region-‘Don’t be a Gama in the land of Lama’.

The anomalies of existence