The City of Nizams: Hyderabad 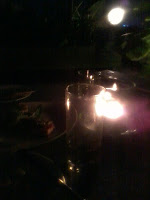 So this post comes a week after I have packed, unpacked and got embroiled once again in the cobwebs of  daily existence. The maid hasn’t turned up and I find myself fuming with rage, picking at cheap combos I can possibly choose from to have some tongue-tingling food delivered at home (yes, living as a paying guest sucks!!), which again the delivery guys refuse to deliver unless it meets their ‘standard’ delivery order and they consider you ‘worthy’ enough to have it processed (bam! what a trade-off!!). Nevermind the useless banter, but this is where I begin to feel transported back to the time when I was in a very convenient, safe and easy-going city called Hyderabad. You can afford to live like a Nawab there, and naturally feel like one too, and quite seemlessly. 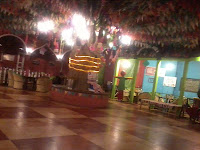 The city has an enamour of its own, which begins to delight and surprise you all the same. The simplicity of the people attracts you like magnet to iron. The city charms you, enigmatic and gleaming in the dazzling lights of the night sky. Hyderabad is a unqiue blend of the old and the new. While the old city masquerades the historic Golconda and the Char Minar, the new/suburban Hyderabad closely examines the niceties of the young, the cattle and the white-collar class, chilling at the next door Inorbit or lost in the lights and music of an illuminated Hard Rock! The experience of travelling in an auto, where the autowallahs lose their sense of direction, pretending to sail past the barrier of a language-problem (nevermind if they take you to an XYZ Hotel, when you tell them to drive you down to Red Fox hotel in as much detail as possible!). You wonder who to blame…and yet despite such experiences, you find yourself enjoying every bit of getting lost, of wandering, of the chase that doesn’t seem forced. 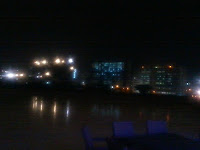 The ecstasy and the feeling that swarms you at the drift of the breezy wind that flushes your being with happiness, that which only the pleasant weather and good company can bring! I found both in Hyderabad, in the desserted lanes of the Jubilee Hills, in a restraunt called SO, and in the midst of a feeling that engulfs you with such pleasant memories of a rooftop terrace (Westin) , a glass of white wine, an overlooking skyline bordering high-flying names of companies that embody thyself in a 6 storeyed tower that looks all the more spectacular against the backdrop of sweet rain, standing out in all its glory, beating the whispers and the loud guffaws of a crowd that assembles for a networking dinner.
The weather Gods and the rain seem to network better. 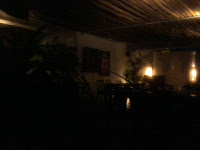 Call it the Pearl Harbor, City of Nawabs or the IT hub, for me it’s a place that continues to string the right notes, brushing past memories, a hint of it unexplored each time, only to come back again and discover more…
Travelogues: A traveller’s revelations

The City of keen Paradox: Gurgaon

The anomalies of existence