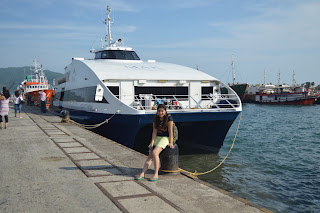 When all else fails, a vacation comes to your much needed rescue. And so we set out, with our bags packed, a travel itinerary ready and hopeful…of finding the divine place still the same. Shrouded in a corner in the Bay, yet right in the middle of blue, blue that blinds you, that soothes you, heals you and leaves you thinking of the infinite… and of course, leaves you asking for more! A second time lucky, as I found myself to be there, this place is every beach lover’s dream come true. Come Port Blair, we hit our standard fauji accomodation, where a day saw light with a usual cuppa hot tea, and evenings, time spent at the Rajiv Gandhi Marine National Park (yeah, the Gandhis leave a mark everywhere but lets not go there!). Andamans offers numerous tourist spots that have something unique to offer. No wonder each time you visit, there’s a million different things to explore, and do, depending on the type of vacation you plan. So this time around, we had thought out that we’d want it to be a relaxed vacation by the beachside, with more quality time doing nothing, than finding out something to do each day. And so with the idea sorted in our heads, we set sail for the Havelock Island, a week’s time to spare in the serene beauty of the expansive seas. The Makruzz offers its own thrill and charm, and even though you are seated in a cruise, you’ll find yourself wave-riding and sooner than later, getting acquainted with the world of ship sailors, the woes of sea-sickness, and the thrill of being Popeye the sailor man! Charting a journey of approximately an hour and a half, you find yourself anchored on the Havelock Island, and so begins the time of your life!
A long queue of men with billboards, shouting out names, a look of inquisitiveness on their faces, turning into a gaze so delightfully exquisite, on spotting the right group of tourists, who match with the name(s) spelled out on the boards they hold out so proudly. With our bags tucked into the Sumo, and selves packed on the seats, we set out to our abode-Holiday Inn!! The beauty of the Island is found, not just in the vast expanses of the different shades of blue, but also in the beauty of its people, the long drive marked by sky-touching palm trees, the vast fields of green beautifully carpeting both sides of the road, the tourist resorts lining your way, one after the other, each one a peculiar shade of brown. The drive from the jetty to the self-picked resort is enough to captivate your senses. The vehicle stopped, and we found ourselves facing a queue of cottage like homes, on either sides, the way ahead leading to the beach that stood there in all its glory! A walk by the beachside, and the beauty of it is enough to leave you mesmerized for dayss… The backside of all the resorts that are concentrated on that part of the land on one side, and the beach on the other, gives quite an islandish feeling. Being the small island that it is, the beauty of the place is infectious and maybe, thats why the people there are equally warm and welcoming! Their frendliness percolates through your heart and strikes just the right chord, whether it be the scuba instructors, or the guy by the bar serving drinks, or the next door waiter taking your order for food. And so thats how we embarked on our journey to explore, as much as we could, the expanse of the Island, and all that we could make of the opportunity!

An evening before that day was marked with excitement and numerous questions a first timer is generally worried about,but nonetheless excited. That day we woke up at 6 a.m., got ready and hit the next door resort, Barefoot Scuba at 7a.m. sharp. While we waited for the instructions, we grabbed a form each and started filling out the details and gulping down fears while signing out the form that transferred any liability of an untoward happening right back at us! Take the kill.  With our suits on and fins ready, we sat, listening to the instructor in rapt attention, careful to not miss out even a single word that would go a long way in cruising our ‘scuba’ adventures. And so having understood the basics involved, the signals and the ‘rules’, (my favorite one being the thumbs up-which, in scuba doesn’t mean all’s good or awesome, but hey I wanna come up!!, as the instructor very wittingly put), we set out into the waters, in a dhungi boat, that we only realised later why its called that! 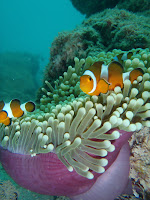 A thousand fleeting thoughts went by my mind while we were enjoying the ‘dhungi’ ride, balancing out weights on each side of the rickety boat, and gazing at each other, with wonder and excitement. Floating- mixed expressions, emotions, much like the unpredictable waters. The boat came to a halt, and we stood there at the Elephant Beach. The instructors arrived in a separate boat, and divided us into groups. While the first group went out, we had to while away our time in the waters, where we simply sun-bathed and relaxed, waiting for our turn. As the heads of the first group started becoming visible, after they first faded out, we braced ourselves for what was to come. The first initial minutes went in embracing all the scuba equipment-the BCD that went on top of our wetsuits, the masks, regulator, fins… the scuba accessories! As we understood the tricks and trades of being underwater, getting used to the bubbles and breathing like a fish, we dived into the deeper horizons. With each dip, we equalized, and went further down. Down into the waters where the fish belonged, where marine life welcomed us- a swarm of fish-each variety in its exquisite splendour-butterfly fish, clown fish darting around the sea anemone, mackerels, corals! The waters seem like they are calling out to you, to tread deeper, to get lost in its enamour. As the sunlight shone bright upon me, seeping in through the waters, I found myself slowly coming back onto the surface. That marked the end of my few moments of ecstasy, which as the instructors pronounced was 45 mins, but to me it was only too little a while to experience magic, and I found myself asking for more! Our way back was a quite ride, time spent more in reflection and self discovery, a stark contrast to the anxieties we were filled with on our way to the beach. It only ended too soon!
The next few days, not surprisingly, we found ourselves visiting the same place, for food-lunch/dinner. Barefoot Scuba felt like home! In such little time, and so little of an experience, we had built an unspoken relationship with the people there, that it felt something special to be there. That very night, it was one of the staff’s birthday, and we enjoyed being the ‘guests’, clicking pictures with people whose names felt so familiar now. Anne, Raoul, Bryce, Kingston, Oli, Ambi were not just names, but a group of people who replicated that experience for us, the trust that you bestow onto another for your life, and the friendliness that defines existence. 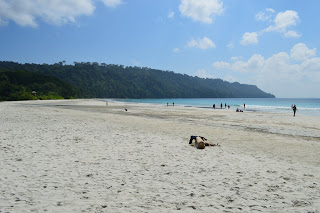 Though it was difficult to live upto the excitement and adventure that the scuba experience offered us, but the next subsequent days we tried! And not much to our surprise, there we found many a experiences. One of the days we rented out cycles and set out right upto a stretch of 9 km, to Kaala Pathhar-another one of the beahces where waves were quite high! The ride was like passing by a beautiful countryside, marked by thick flora, high reaching trees, and beach on the other side. It was nothing short of paradise! The click of the camera captured those wonders of beauty. On another day, we went out to the favorite and the most popular beach on that island, the Radhanagar beach, a living spectacle, also named the ‘best beach in Asia’ by Time in 2004. You only have to step there to know why! A lazy day spent in the relaxed shade of the trees that line one end of the beach, the white sparkling sand that tingles your feet, the high water wave-riding, and a filling lunch in Barefoot Scuba restaurant right in the middle of dense forests is all that one needs to define a beautifully rewarding day. It couldn’t get any better!
And so having explored every nook and corner of Havelock, an agenda that was unfinished on our last trip, we felt immensely satisfied and extremely nourished (thanks to the vitamin D exposure ;)). The last night in Havelock, while going to have dinner at the same place, after drinks at Symphony, we spotted a peculiar ring in the sky that formed around the moon. We wondered what it was, startled with sheer disbelief of what the night-sky had to offer. After a few wild conjectures, we couldn’t conclude anything, and like everything else, it dissolved into the sky, just as mysteriously it appeared. And a  few days later, I found myself reminiscing about this trip, just as miraculously as I was pondering about the ring, gazing at the night sky there a few days ago. 🙂

The City of keen Paradox: Gurgaon