My first brush with Bombay

In a flurry of activity, I packed my bag and rushed to take the flight of steps from DGR-19 to gate no. 3, SIMS campus. We packed ourselves in an auto, to reach the Pune station in 45 mins. Another one hour, we saw ourselves haggling, negotiating, standing in long queues (only to ditch it later), all to materialize a ‘good deal’. Finally, the 8-pack tucked in a Sumo set sail to the land of dreams. No, not Wonderland. To amchi Mumbai. There I was whatsapping my ‘C#’ group of friends at the proclaimed excitement of passing by E-square (which is approx. 5 mins from SIMS campus) at 8 p.m. Skipping a 5 p.m. lecture only to land in a cab headed for Bombay at 8 p.m. was indeed an achievement. The ghats lay shrouded in mystery amid the darkened night sky. Chatting, eating, gossiping (just a bit) – 3 hours went past in a whiff. Moments later Nerul, Vashi, Kharghar, Belapur, Chembur sounded like foreign words dropped out of geography textbook of a 5 year-old.

At 11:30 p.m. I reached my abode in Navi Mumbai – Blue Bay apartments, opposite Seawood station. An elder cousin sister who had recently moved in to the new apartment being a welcoming host, ensured that I was taken care of. And so I was pampered with Belgian chocolates that came from my jiju’s recent visits to his Co. headquartered in Germany, home made walnut and banana cake (she’s an excellent cook and a popular food blogger), and a box of goodies that I neatly packed in my bag for hostel. 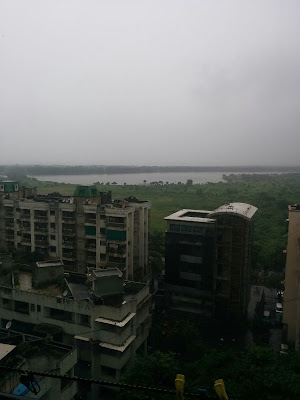 With the daylight dawned a fresh chapter in my sojourn in Bombay. After tying rakhi and executing the ceremonial rituals for the day at my bua’s place in Powai, I left for the day with my cousin brother for a tour about the city. Deciding to stay put on the road, we took the taxi, and headed for Colaba. Being the first of my drives, I did not mind the traffic, the honking , or the overcrowded roads, which were the constant rants of my cousin seated next to me. The difference between a Mumbaikar and a tourist maybe. 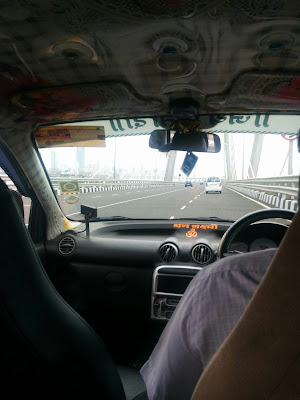 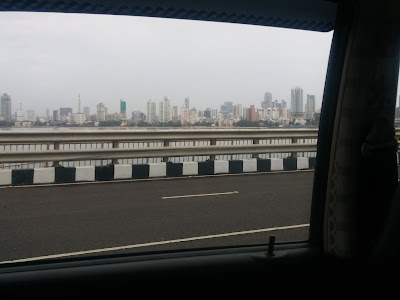 As we crossed the Worli Sea-Link road, overlooking the row of sky-scapers and a ton of buildings across the vast expanse of the sea, hints of Dubai came to me like an adrenaline rush and for the first time in a long expanse of time (after Andamans) did I feel a brush of a foreign country in India. A longer trail still, we whisked by Peddar road – Antilla, the Ambani mansion which got me swooning, and landing with a twisted neck, Jindals and Singhania mansions, Cadbury office and the Hajji Ali juice center by the corner. 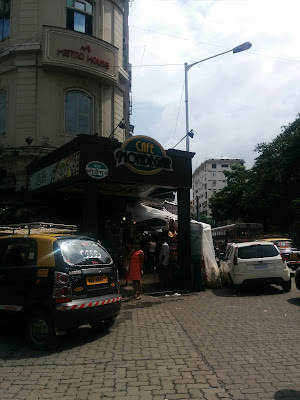 The road bent and the taxi came to a halt. Stepping out, at the road crossing stood Cafe Mondegar like a hallway. We took a corner table. A few selfies later, we had an assortment of dishes – Roasted chicken, fish and chips, Grilled fish, and Haneiken beer on the table. 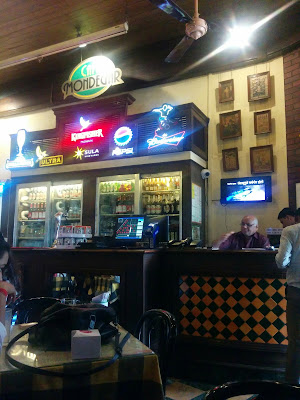 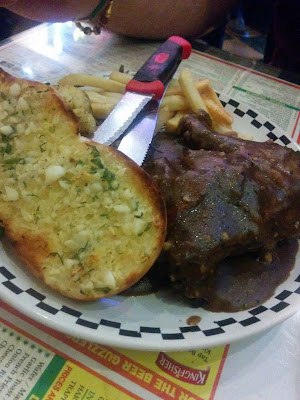 Strolling by Colaba Causeway, I found myself admiring the stalls that displayed a myriad of trinkets, clothes, pocket watches, chappals etc. The peculiarity of it all was that I couldn’t help but compare every ounce of the city to Delhi. Maybe the after-effects of staying there for 7 years or maybe the natural inclination to jump on the Bombay v/s Delhi bandwagon. Either way, it was fun drawing parallels between the two: comparing Causeway to Janpath, Colaba to CP, local to metro, and of course the vibe of the cities profoundly influenced by its people. While Delhi has more concrete infrastructure grasping for attention by way of its fancy malls, metro, overhead bridges, organized traffic and the jazzily dressed up Delhiites, Mumbai feels more grounded and green, cosmopolitan in its culture, appealing to the senses scraping past a layer of superficiality and striking a chord. Never mind the mess that’s an extension of the incessant rains, and the overcrowded roads. 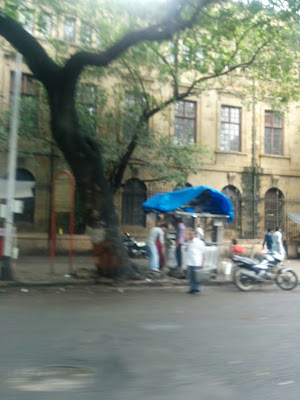 My fascination with Leopold Cafe, particulary after reading Shantaram led me to peek-a-boo before making a move. It was quite unlike the raised stools across a bar sort of a image that I had imagined. Shantaram to blame for not living up to the hype. As we made a dash of steps ahead, before crossing the road, I bumped into media persons from the You Tube channel wanting to make a video. And so the interview started – from define harassment, a couple of follow-up questions in between, to a final message for the ladies – my day was already made, just that I’m still clueless about which You Tube channel to look up the same on. 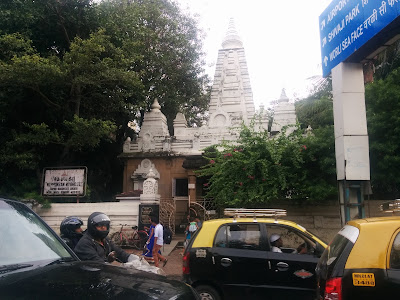 The box shaped stores ranging from alcohol to daily necessity stores, to a pan shop next to a Buddhist temple of sorts, and a lane leading to Sophia college the next moment, South Bombay surprised me with an electic mix of architecture, taste, and interests. The old-school British building looks of Bombay University, Wilson college, and the Bombay high court were particularly intriguing, replicating buildings right out of classics, taking me back to the days of Jane Eyre and the Thornbirds. 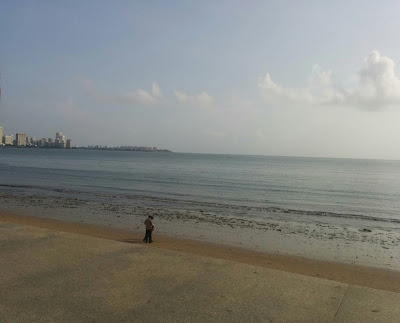 The walk past Marine Drive, looking into the vast expanse of the waters ahead, and the iconic buildings to the left, I was transported to a Bombay that one invariably pictures in their head, when ‘Bombay’ is thrown at him. The roadside kulfi at the shop that’s been there for eons came as a welcome relief from the sweltering heat. Being on the roads, in the middle of traffic isn’t the best part of being in Bombay, but I enjoyed every bit of the journey back home. A couple of minutes to spare, I quickly met a friend of mine at my cousin’s pad. Thereafter, my elder cousin sister picked me up from Jogeshwari East and we were off to Nerul after a day of being on the roads. 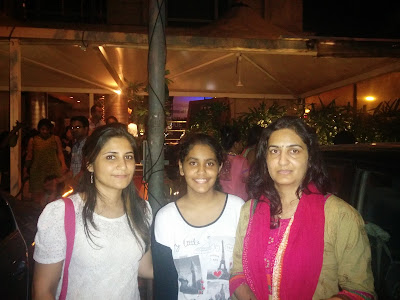 We stopped over at Powai for dinner at Cafe Mangii since we wanted to have something light after a day of hogging. Everything from the pasta, the bruschetta to the Lebanese platter was just perfect. With our heavy selves tucked in the car, we called it a day at 12 a.m. midnight. 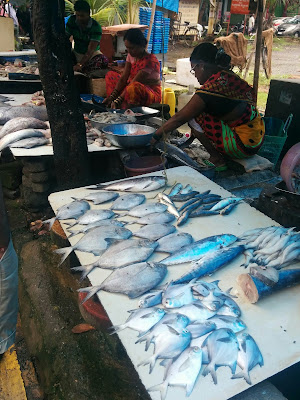 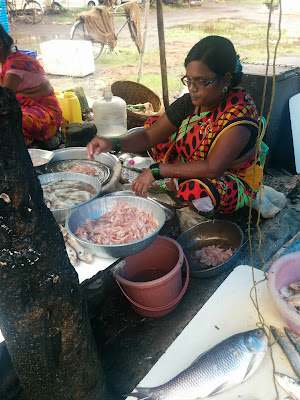 Sunday was welcomed by our lazy selves, and rounds of hogging. We went to the nearby market and sifted through the fish and prawns carefully picked for lunch. After a sumptuous lunch of healthy, juicy prawn curry and rice, I packed my bags. It was time to leave, only temporarily, for I had already made up my mind to return and explore another side of Bombay, with friends, the next time over.

My latest tryst with Yoga